How safe is Marijuana in treating the side effects of cancer treatment? 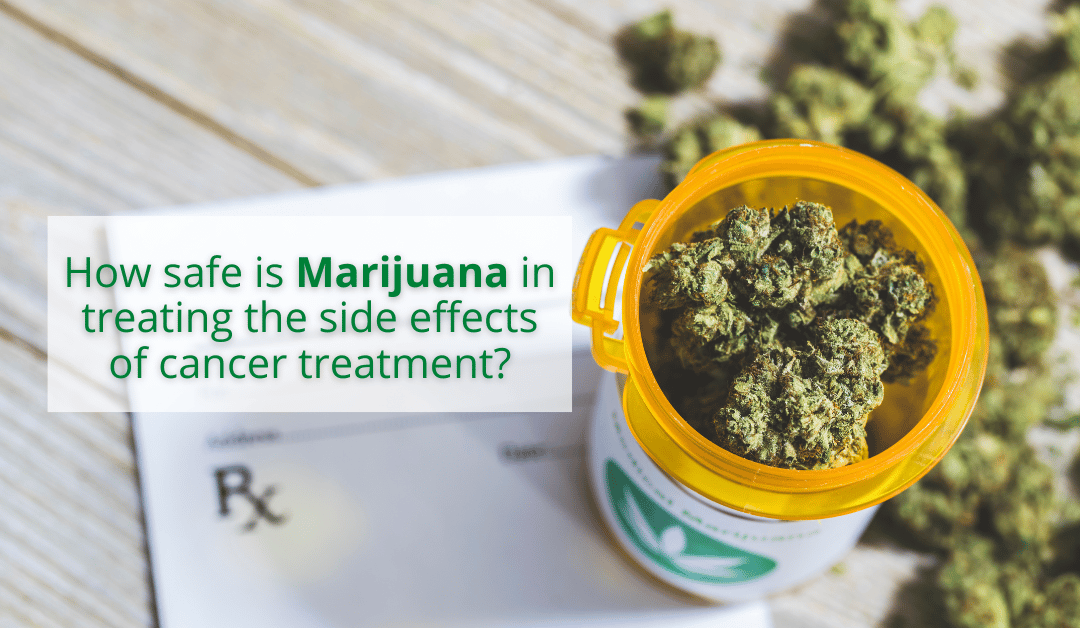 Marijuana is made up of dried leaves, flowers, stems, and seeds that come from the Cannabis Sativa or Cannabis Indica plants. When most people think of marijuana, they think of movies like Dazed and Confused or Pineapple Express. Often, the drug carries a negative connotation and isn’t taken seriously in the medical world. Despite its recreational uses, marijuana’s origins as a medicinal remedy date back to the ancient world. Archaeologists believe one of the earliest references to the use of marijuana as medicine was sometime around 2800 BCE, as it’s mentioned in the medical compendium Pen Ts’ao, written by Chinese emperor Shen-Nung (also known as the Father of Chinese Medicine). One of the actives in marijuana is THC, or delta-9-tetrahydrocannabinol. It can make you “high” or give you a mind-altering experience, but it has also been shown to help with pain, nausea, inflammation, and function as an antioxidant. Cannabidiol (CBD), another molecule contained in marijuana, has been shown to help treat seizures, reduce anxiety, and paranoia while also counteracting the “high” generated by THC. Marijuana can be taken in a variety of ways, but the two most common are smoking it or eating it in an edible form.

How can Marijuana help with the side effects of cancer treatment?

Many cancer patients use marijuana to alleviate the negative effects of their treatment. Smoked marijuana has been found in limited studies to help with nausea and vomiting caused by chemotherapy as well as neuropathic pain caused by damaged nerves. Marijuana has also been shown to function as an appetite stimulant.

Can Marijuana be Harmful?

Marijuana can cause adverse reactions and side effects. The euphoric “high” feeling you experience from THC can make it difficult to regulate your actions, induce disorientation, and occasionally exacerbate anxiety and paranoia. If you are already under a lot of stress because of your cancer, Marijuana could make you feel even worse. Marijuana affects everyone differently, and it’s difficult to predict how you’ll react.

In addition to delivering THC and other cannabinoids into your lungs and body, smoked marijuana can also carry other poisons such as carcinogens (cancer-causing compounds) that are also found in tobacco smoke. This is not only dangerous to your health, but it also exposes those around you to secondhand smoke.

What about Cannabinoid Drugs?

Dronabinol and Nabilone are two cannabis medications on the market that have been licensed for medicinal use in the United States.

Dronabinol– a THC-containing gelatin capsule used to treat nausea and vomiting caused by chemotherapy, as well as weight loss and decreased appetite.

Nabilone– contains a synthetically produced substance that is similar to THC. It is used as a last resort to treat nausea and vomiting caused by chemotherapy when other medications have failed.

Are there side effects from using these drugs?

There are potential adverse effects, just as there are with marijuana and other prescription medications. Some people have seen a rise or drop in blood pressure as a result of taking these medicines, particularly upon standing up. They’ve also complained of dizziness, lightheadedness, and fainting. These medicines have the potential to create a “high,” as well as mood swings, lethargy, and can worsen depression, mania, and mental disease. Hallucinations have been reported in some patients on Nabilone. Furthermore, these medicines have the potential to interact with alcohol and other substances. Before taking any of these medications, talk to your doctor about the possible side effects and what to expect.

Is there another product that can help with the side effects of treatment?

Enterade is a clinically proven, plant-based medical food that helps to manage the side effects from cancer treatment. Unlike Marijuana, enterade has no known side effects or drug interactions and can help relieve discomfort from diarrhea, nausea, vomiting, fatigue, dehydration, and unwanted weight loss. Enterade’s unique blend of plant-based amino acids helps by rebuilding the cells that line your intestines, fortifying your gut against the damage caused by cancer treatments. Using Hydro Active Technology, enterade is formulated to hydrate better than leading sports drinks, oral rehydration solutions, and even water.

Medicinal Cannabis: History, Pharmacology, and Implications for the Acute Setting

The Pot Book: A Complete Guide to Cannabis